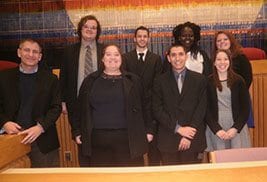 The American Mock Trial Association was founded in 1985. Presently, the association hosts 25 regional tournaments, as well as a national tournament. More than 350 universities and colleges participate in tournaments during the year, providing an opportunity to compete for more than 5,300 undergraduate students.

For the past 15 years, the Kent State Department of Political Science and the College of the Arts and Sciences have worked together to send a team to the American Mock trial Association. During the competition, the teams must act out a court case. The case used in the competition is either a civil law case or a criminal case. The case used for the 2015 competition centered on the death of an 11-year-old girl who was shot and killed by her 11-year-old best friend.

Twenty-six teams from colleges and universities located in Illinois, Michigan, New York, Ohio, Pennsylvania and Washington, D.C., participated in the Pittsburgh tournament. In the competition, the Kent State team members played the roles of defense and prosecution attorneys and witnesses.

Read the rest of the story here.